So far this week we’ve landed a 16/1 BTTS & Win Double on Monday and a 47/1 Anytime Goalscorer Accumulator on Wednesday.

Last night we added two more Acca winners – first it was our 8/1 ‘Both Teams to Score’ accumulator that landed which we followed up with a 25/1 Overnight Accumulator winner!

Over the last 3 weeks time we have landed 11 Accumulators! 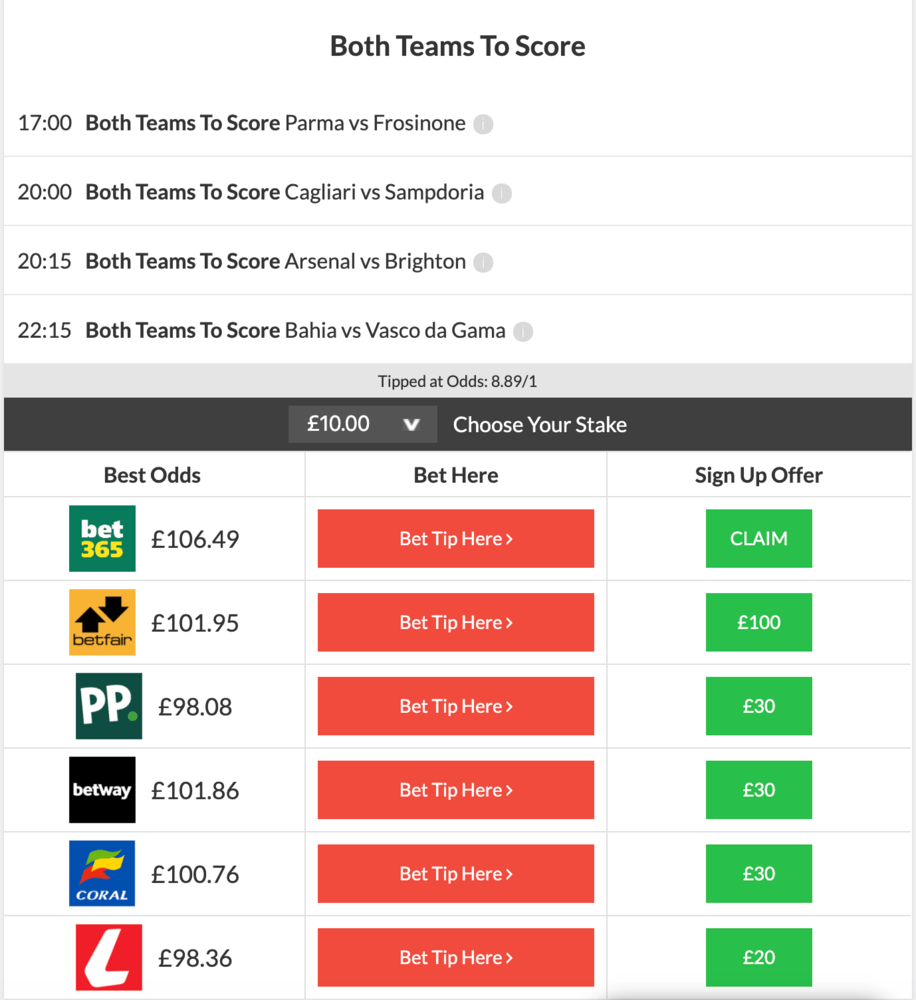 Our 4-fold started in Italy where Parma hosted Frosinone in the Coppa Italia. The home side went up 1-0 in the 20th minute. The visitors dominated possession in this one and were rewarded with a equalizer in the 71st minute which meant our first leg of the Acca had landed. Parma went on to win 2-1 thanks to a 92nd minute penalty goal.

Arsenal’s woes continued last night, they lost to Brighton 2-1 at home. Webster scored in the 36th minute to put Brighton in the lead, Alex Lacazette scored for Arsenal in the 50th to make it 2/2 for us on our Acca. The visitors grabbed the win in the 80th through Maupay spoiling Freddie Ljungberg’s first home game in charge as Arsenal caretaker manager.

We had a bit of luck in the 3rd game of our Acca as Cagliari faced Sampdoria in the Coppa Italia. It was 2-0 to the home team after the 48th minute. Sampdoria didn’t give up and after 18 shots on goal they finally managed to score in the 87th minute to keep our Acca alive and we were down to one final leg!

That final leg was in Brazil between Bahia and Vasco. It was a very heated match which saw two red cards. Vasco went a man down in the 43rd minute and Bahia took the lead just two minutes later from the penalty spot. It was 10 vs 10 in the 82 minute after Arthur was shown the red for Bahia which helped Vasco level things up. Marrony scored in the 85th minute which made it 4/4 and landed our 8/1 Accumulator!! 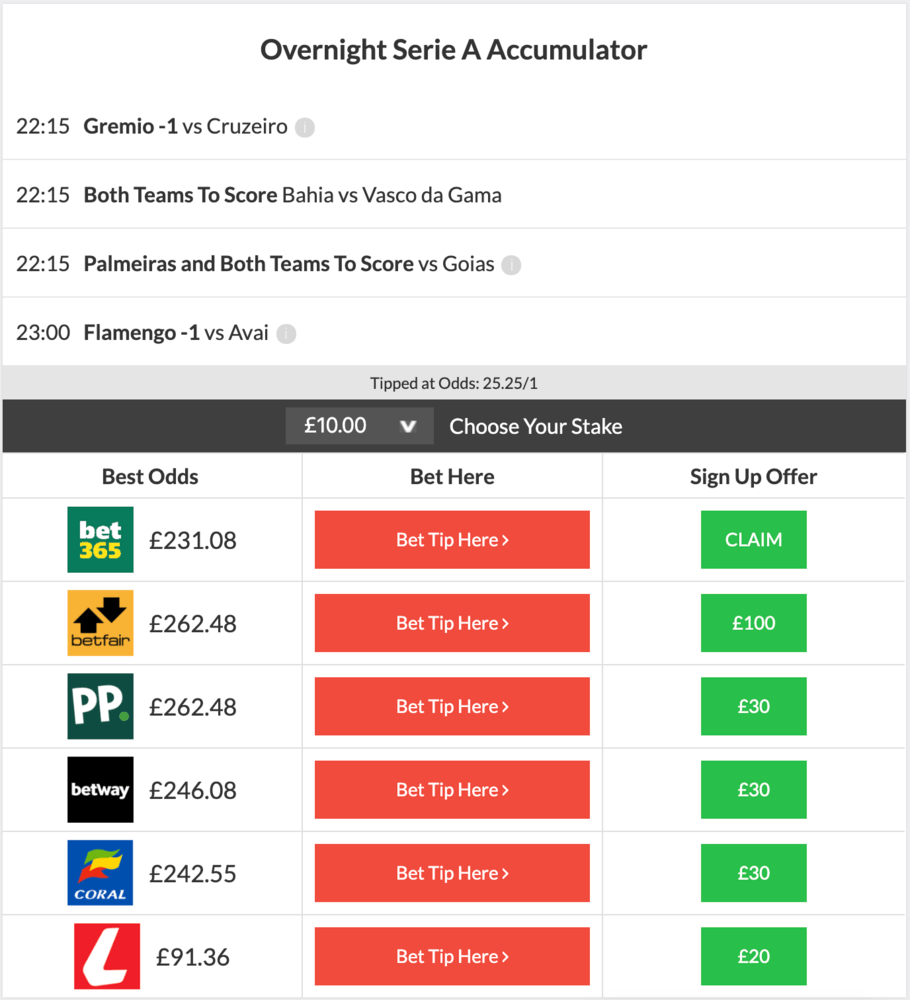 The Bahia vs Vasco game was also in our Overnight Accumulator, followed with three more Brazil Serie A games.

Gremio beat Cruzeiro 2-0 to land our -1 handicap bet. It was a tight affair with the first goal coming in the 67th minute. The home team doubled their lead thanks to a penalty in the 85th minute which was converted home by Pepe.

It took only 27 minutes for Both Teams to score in the Palmeiras vs Goias game, which made it 3/3 for us on our Accumulator. It was a dominant win for Palmeiras who finally stopped a 3 game losing streak and won this one 5-1 in the end.

And finally, we backed Flamengo -1 handicap against Avai at home. It was 1-1 after 22 minutes, but then Flamengo just shifted into another gear. The first half ended 3-1 and they scored three more goals in the 2nd half for a final score of 6-1 and more importantly landed our 25/1 Overnight Accumulator!!

Be sure to bookmark our Free Football Tips page for predictions on all 2019/20 Premier League games and much much more!

Here are a few winning betslips sent to us by our followers on twitter:

You guys are on recently. Thanks again. Literally pulled over £500 from the bookies in just over a week. pic.twitter.com/lvrpahFOzx

Boom get in there pic.twitter.com/D3fQAJl4Pn

I got on @FootySuperTips and is a win. Merci pic.twitter.com/lszlMW4tHE

View the rest of this betting tip at: https://www.freesupertips.com/news/25-1-and-8-1-accumulators-land-on-thursday-night/